Peter Oborne, writings in today’s Sunday Telegraph, are music to my ears, if that’s actually possible – writings, ears?    His contribution to an article looking at the issues around the recent widespread flooding, focusses on the political dimension and in particular, the hamfisted and spiteful involvement of one, Eric Pickles MP. 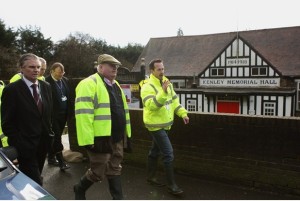 In my opinion, the position of the local council leader, Mike Fisher (behind Pickles wearing glasses, says everything there is to say about Eric Pickles relationship with local government.
Photo with thanks to Croydon Advertiser

No sooner was Eric Pickles put in charge of dealing with the flooding incidents that were impacting a number of areas in the south of England, than he started apportioning blame and apologising for the supposed shortcomings and failures of the ‘blameworthy’.

Having honed his talents for spite and bile on belittling and criticising local government, he had now set about the Environment Agency, for failing to prevent the flooding of thousands of homes and businesses.  By inference, according to Peter Oborne, Pickles was also back stabbing a government colleague, Owen Paterson, laid low by a sight threatening detached retina that required urgent surgery, the cause of Pickles appointment, along with Lord Smith of Finsbury, Chairman of the EA.

For those of us involved in local government, this was very much par for the course with Eric Pickles, especially if there was a reporter’s microphone, or TV crew in sight.  However, and morale to anybody suffering from Pickles’s non-stop spite, is that his big mouthed, brute force handling of his new role, has seen him outed as no more the the “blundering Whitehall meddler” we all knew him to be.

Disappointingly, Peter Oborne suggests that, up until this point, Eric Pickles was actually considered to be a safe pair of hands,           this despite his unchecked assault on local government, as Secretary of State for Communities and Local Government.  So, unless Owen Paterson and Lord Smith confront David Cameron and tell him in no uncertain terms, it’s him or us, it would seem that local government is stuck with this loud mouthed lout, until May 2015.